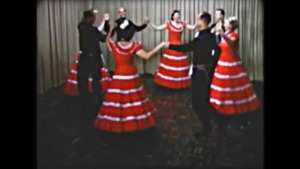 Fortunately, we have live dance recordings of several of the earliest MWSD women callers. We even have a video of one of the earliest, Mildred Buhler. She called in Northern California in the late 1940's, in all likelihood starting as a traditional caller. In 1952 she moved with her husband to London and, while there, shared in the founding of the British Association of American Square Dance Clubs. This clip is from a demonstration video she made for the Northern California Association before moving to London.

One of the earliest of the MWSD women callers was Osa Mathews. She lived in Palm Springs, CA and, in part because of generous participation in town events, was known to the town's Chamber Of Commerce. When the stars that lived there put on a party they sometimes included square dancing and Osa was their caller. When we visited with her she described dances she had done at the homes of Jack Benny and Frank Sinatra among others. Osa was a recognized leader and the only woman caller invited to the first CALLERLAB Convention. The May 1983 issue of American Square Dance magazine had a portrait of Osa on the cover and an article about her on page 13. Although she was a very busy and popular caller, the only recording we have of her is the track she did on the 1974 Sets In Order Premium record. (We are indebted to Brian Hotchkies in Australia for this clip. In response to my request during a phone call, he found the record and digitized the Osa Mathews track.) In 1984 at the National Square Dance Convention, Osa joined with the other two callers, then still active, who had been on the program at the first Convention 33 years earlier. The other two were Cal Golden and Bob Van Antwerp.

Few of the women callers were known widely enough to have regularly made records. One of the few who recorded early and often was Jeanne Moody. She recorded sixteen records under that name and then another thirty-two as Jeanne Moody Briscoe after marriage to caller Jim Briscoe. The audio clips we have are from a dance she called in California in 1974.

Jeanne Moody - Your Memory Sure Gets Around

Jeanne Moody - Your Memory Sure Gets Around - singing square

Another of the early women callers was Don Armstrong's wife, Marie Armstrong. She was an active caller in her own right and was on the staff of square dance camps held at the Peaceful Valley Guest Ranch in Colorado as both caller and director of other activities. We do not have a recording of her calling a full dance but we have two examples of her calling from a dance where her husband was the featured caller. This dance was in 1960 for the Down East Western Square Dance Club in Kittery, ME which was the first MWSD club in Maine. Marie called a full tip early in the evening, and we have included here a patter call. You can also listen to an audio clip of her calling Mountain Dew.

Marie and Don Armstrong - Trail of the Lonesome Pine

Marie also joined Don for the closing singing call, Trail Of The Lonesome Pine. Elsewhere on this website, you can listen to Don and Marie presenting In My Adobe Hacienda. We hope soon also to have available a video interview with Marie.

A very early MWSD caller for whom we have an audio recording is Gloria Rios Roth. She began calling in Western Massachusetts in the late 1940's. In the early 1950's, as clubs were forming rapidly in New England, she was the only well known woman caller. She would later share in the founding of caller associations and was one of the early members of CALLERLAB. She was recognized with that organization’s Milestone Award in 1999 and a Gold Card Life membership in 2005. This clip, from 1960, is a patter call.

As a teacher (her college degree was in education) Gloria Rios Roth became involved in teaching callers with a particular emphasis on women. She was recognized as a CALLERLAB Accredited Caller Coach the first year the program was established. This is a singing square, Maria, from a 1960 dance.